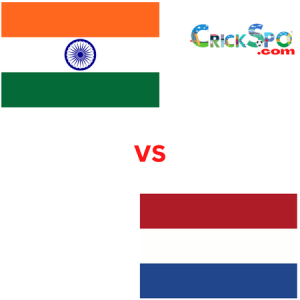 The Dutch team lost their first match to Bangladesh and this team’s opponent would be the mighty India team. It would be another tough match for the dutch team.

The top run scorer from the Netherlands team in the previous few years is Max O’Dowd He has 309 runs in 10 matches with an average of 30.90.  Another fine batter of the Dutch team is Bas De Leede who has 296 runs in just 9 innings and holds an average of 49.3.  In the bowling department, Fred Klassen is their main man. His bowling record shows that he has 12 wickets in 8 matches while Logan Van Beek is their top wicket taker.

He has 13 wickets in 8 matches and could play really well. We have now seen the performance of some of these players mentioned above in the qualifying round of the T20 World Cup 2022 where Netherlands with 3 others teams progressed to the Super-12 stage of the tournament.

India’s win against Pakistan in their first match turned out to be a big and an exciting victory. The opening spell by their pacers had surprised the Pakistani batters. India has some players in their team which are considered best of best all over the world. Virat Kohli and Rohit Sharma are two of such players.

Virat’s innings of 82 match winning and unbeaten runs against Pakistan was termed by himself as his one of the best innings so far. Moreover, Virat Kohli is on 3rd spot on the list of most runs in international cricket by Indian players while Rohit Sharma can provide an explosive start. KL Rahul is not in his best form these days, but he is a very dangerous batter. Suryakumar Yadav is considered the Mr.360 of the Indian team as he has a variety of shots. Hardik Pandya is a brilliant finisher of the Indian team who is a fine bowler too.

The unavailability of Jasprit Bumrah raised some questions on the bowling attack of the Indian team but with the spell of Arshdeep and Bhuvneshwar in the match against Pakistan, these questions slowed down. The Indian team currently has 4 pacers in it which is a good strategy considering Australian pitches favor pace bowlers. The Indian team looks like a balanced side who can turn things up for their opponents, especially when the opponent is Pakistan.

India are the clear favorites to win their Group C World Cup match against the Netherland on Monday. The Netherlands have never won a World Cup game, while India have been successful in the past. However, they’ve never played against a team as strong as the Netherland, who are unbeaten in their last 10 games.

The Netherlands will likely rely on their prolific attacking players such as Memphis Depay and Robin van Persie to score goals, but India have held their own against much tougher opponents in the past. With an experienced defense led by captain Mahendra Singh Dhoni and solid midfield play from Anil Kumble and Piyush Chawla, India is confident of securing a win against the Dutch.

Without any doubt, India are favorites for this match as they have a better, balanced and experienced team as compared to Netherlands.